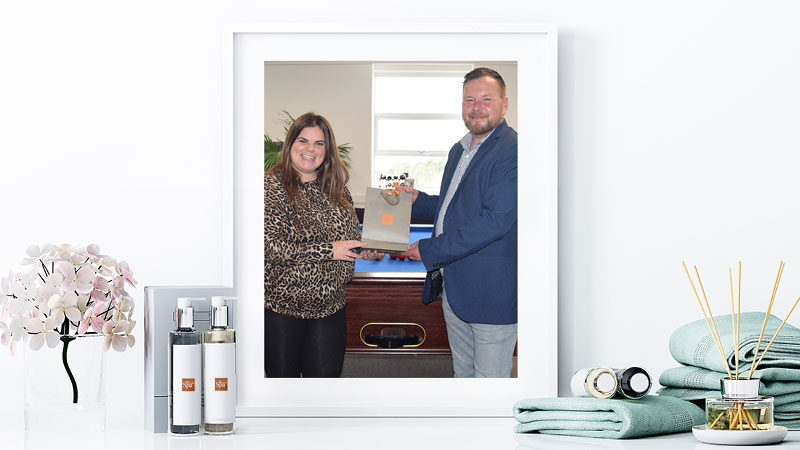 2021 marks ten years of service at MonkeyFish Marketing for Senior Designer, Nikki Wilkinson. Joining the MonkeyFish team in 2011 as a Junior Website Graphic Designer, Nikki has remained an integral part of the team over the past decade.

To celebrate this milestone, MonkeyFish has presented Nikki with a spa day voucher at the Woodland Spa for her and one other person to enjoy.

Commenting on Nikki’s ten year MonkeyFish anniversary, Founder Phil Monk said: “Nikki is a genuine asset to the MonkeyFish team, creating fantastic graphics and working on some of MonkeyFish’s most notable projects over the last ten years. Nikki works very closely with our biggest clients, including international wholesale exporters, Smylies. There’s never a dull moment in the office with Nikki around, that’s for sure.”

How did you end up working for MFM?

I was recruited by MonkeyFish founder, Phill Monk, as I had worked with him previously following graduating from university. We worked for a company in a similar industry to MonkeyFish Marketing, so I was already experienced in the industry as a graphic designer.

What roles have you undertaken during your time at MFM?

The roles I have undertaken during my time at MonkeyFish have evolved over the years and I feel like I have touched all areas of the company, in some way or another. I started out as a Junior Website Graphic Designer and from time to time, designed in other areas of design for stationery, branding and banner/adverts. I was given the opportunity to develop my skills as the years went by – learning to develop website designs into HTML, to help support the development team and eventually a little understanding of PHP for WordPress built websites, while adapting to SEO practises. MonkeyFish Marketing formed great working relationships with other businesses, providing us with opportunities to outsource extra work. I was lucky enough to be given the role of project manager, which entailed supporting the transition from briefing to delivery of each project. As MonkeyFish grew over the years, so did my role – today I play much more of a managerial role in the design team and work on quality control of projects prior to their launch.

What has it been like to see MFM evolve over the past 10 years?

As you can see from my roles, the company has evolved too, with MonkeyFish always striving to improve and be a better company for both it’s staff and clients, as well as being open to change for the better. In my opinion, the company has gone from strength to strength in recent years, which is down to Phill building solid partnerships with Steven, Tony and Graham – propelling MonkeyFish to join The Hatch Group. Making MonkeyFish flourish into an even stronger agency. It has been incredibly rewarding to be a part of this journey.

There are lots of memorable moments from my ten years at MonkeyFish, but the top three would have to be playing mini-golf in our old offices with Phill and the rest of the team, along with the design team doing our very own Mannequin Challenge and finally, my first client visit which was to a company called Qube Events – I really enjoyed seeing the clients in their on environment and seeing what their business was all about in the flesh!

If you’re looking to bring your web design visions into reality, look no further than the innovative MonkeyFish Marketing print and web design department.

Contact a member of our friendly team to find out more via our online enquiry form or alternatively, call us on 01282 504730.